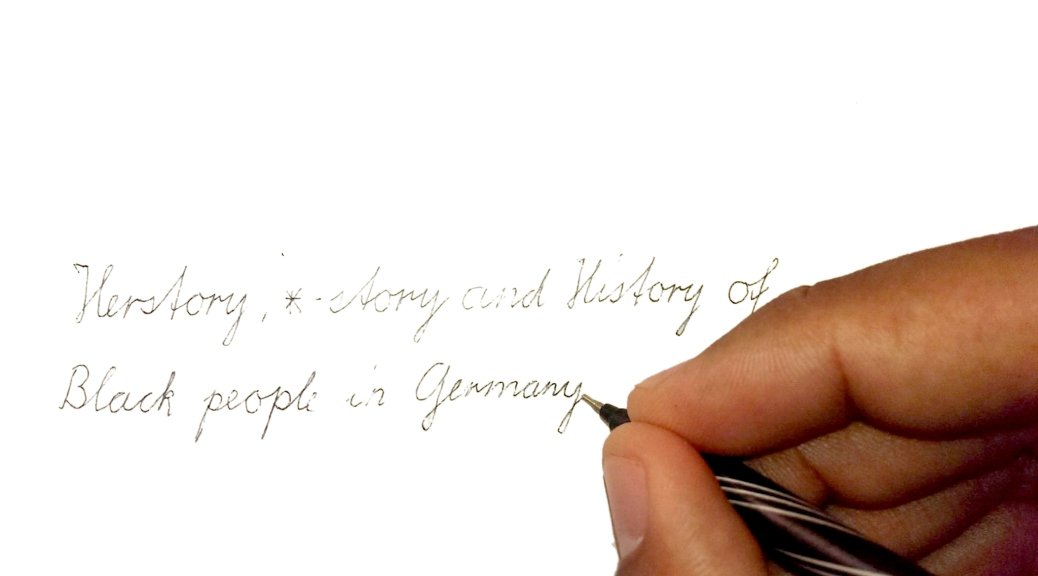 In this blog I want to briefly summarize the history of the Black German movement from my perspective. I think it is important to understand the current situation and the current state (of mind) of Black people in Germany. For more detailed information about the history I also want to refer to the other great blogs on the “Arriving in the future” website, which greatly describe and summarize many chapters of Black history in Germany.

We’ve always been a part of this country, and sometimes even a significant one. Until now we know, that the earliest mentions of Black people in Germany were Saint Maurice and his Theban legion, which were Black Egyptians around 200 ad. If you ask me I personally believe the common picture of Christian saints with a golden halo around their heads standing on a mountain is the sun shining through the Black African hair and the white Celts and Germans saw the sun shining through our hair, because they had to look up and they had to look up because we sat on moving gray mountains – elephants, when people like Hannibal or earlier African queens,* and kings rode through the European mountains. But these are so far only my personal conclusions.

We make a little jump until the 18th century, where the enslavement and colonialism were going on. The German state Brandenburg was one of the most significant trading place for enslaved Black people in whole Europe but nowadays nobody knows about it. Why this is the case I’ll explain later. The German philosopher Anton Wilhelm Amo was an enslaved African himself. As a child he was sent as a gift to a German aristocrat in the 1700’s, who decided to see how far a (insert colonial slur for Black people) could make his way in the German education system. Amo got two PhD’s, became a lecturer at a German university and wrote wonderful texts that shattered the capitalistic system down to its foundations, which was responsible for the enslavement and colonialism. But after his death Germany did, what it did best since colonialism and still does best until today: It burned his works and made Black German work, history and people invisible.

Before World War I Germany committed the first genocide in the twentieth century by killing between ten thousands if not hundred thousands of the people of the Herero and Nama tribes in Namibia. Briefly summarized, millions of Africans died of the direct or indirect influence of German colonialism. Germans often try to claim, that their ruling was not that bad because they themselves “only” shot hundreds of thousands out of a few millions of Africans, while the British and the French killed dozens of millions. But the German invaders manifested the already existing hierarchy between the Tutsi and the Hutu – a hierarchy, that already existed before, but never had this incredible tension and hate in it until both people experienced the German oppression. The genocide of the Tutsi was, if you ask me, an aftershock, which would have never been possible without the huge trauma of colonialism. But all of this happened in Africa, not in Germany and therefore it was much easier for Germans at home to deny their history.

During World War I Black French soldiers were stationed in Europe and had children with white German women. These kids were the so-called “Rheinland bastards”. The Rheinland was the German region, where these kids were born. But Germany eradicated this evidence of Black people and Black history too according to its race theories and because they believed their white race would not be upgraded but made more impure through the existence of mixed race children. Most of these children were sterilized by force when they were still young and/or were killed as adults during the Nazi regime. There is a wonderful project from Mokoari street productions where they’re shooting a film right now about these children. The film itself is called “Rheinland” and is made by predominantly Black filmmakers! So even today we ourselves are still the ones who have to arduously uncover our own history.

During the Nazi time many Black people in Germany were killed or imprisoned in the concentration camps. Only a few people like Gert Schramm (judge), Hans-Jürgen Massaquoi (later and in the magazine “Ebony” in the U.S. ) or Theodor Wonja Michael (actor) survived the horror and later wrote books about their lives in Nazi Germany. Germany mentions Jews, Sinti, Roma and homosexuals as victims of their crimes – but until today it never mentions Black people. We were invisible then and are kept invisible until today.

During the 80’s tiny groups of Black people all over Germany started to form and organize. I can only assume that the U.S. civil rights movements had also activated Black people in Germany. During this time Audre Lorde came to Berlin and spoke with Black German women. She gave us THE initiating kick and is also the reason the core of the small Black German movement always consists and consisted of feminist, academic and modern thinking Black women and not patriarch Black men. Through Lorde’s encouragement and influence two young Black German women Katharina Oguntoye and May Ayim wrote one of the first and most important Black literary milestones in Black German history – the book “Showing our colors: Afro-German women speak out (1986)”.

Also at this time the “ISD – Initiative Schwarze Menschen in Deutschland” (Initiative of Black people in Germany) was founded, which by the way celebrate its 30th birthday this year! The organization “Adefra” (Black women in Germany) was also founded at this time. These initiatives did and still do until today again and again continue the work of making us visible and giving us a voice. A project, which incorporates this idea really well is the exhibition “Homestory Deutschland”. It was launched 10 years ago and still travels through the world and shows beautiful portraits of Black people in Germany who have lived and/or still live in Germany together with short and wonderfully biographies.

So when I speak of Black people making themselves visible, many people am I speaking of? We don’t know, since Germany still doesn’t talk about race, but it is estimated we’re roughly about 1 Million out of around 83 million people living in Germany. I think the fact that we still are so few in number adds to the fight for our rights and our recognition.

But brave as we Black people are all over the world, in the last decade we have become LOOOUUDEEER! Which is a wonderful thing.

In my next blog I will try describe the everyday racism one faces as a Black person in Germany and will try to describe common states of minds of Black people in Germany. I will also articulate a little bit more from my neurodiverse perspective. Thanks for reading this post and I would love to welcome you on my next one.

Stories of Home and Exile

Arriving In The Future

Arriving In The Future Ballhausnaunystr. Performance

Arriving in the Future

Arriving in the Future